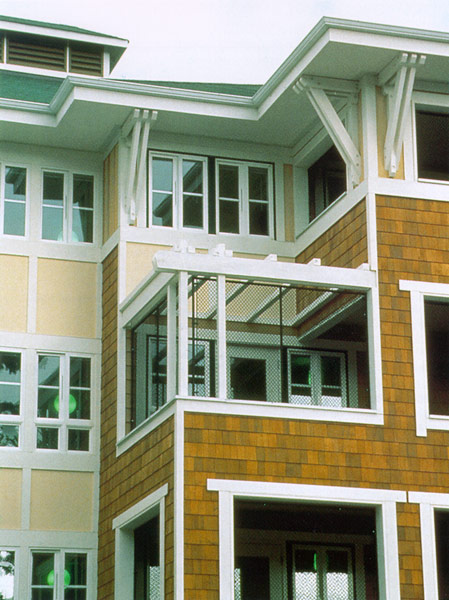 YWCA FAMILY VILLAGE, Redmond, Washington A recent study of the demographics of homelessness found that the Eastside of King County, Washington, which has been developing rapidly over the last decade, was particularly lacking in services for the fastest growing population of homeless people, women with children (over 6,000 in 1993). According to Sue Sherbrooke, Finance and Property Director for the Young Women's Christian Association (YWCA), "Many of these families are victims of job loss, loss of a partner, or domestic violence" The YWCA has an innovative program designed to help families stabilize their lives and develop the skills to live independently. In 1994, 100 per cent of the families leaving the program secured permanent housing. Besides transitional housing, the residents need job counseling and childcare. To increase their understanding of the daily needs of women and children in transition, architects Michael Pyatok and Ron Hopper met early in the design process with YWCA program staff. The result is a safe and functional apartment building with ground-floor YWCA offices and social services wrapping around south-facing recreation facilities. Screened porches off the upper story corridors become play areas on rainy days. Although the Family Village is among the tallest buildings in Redmond it fits in well both physically and socially. The architects saved tall trees in the front and designed the exterior to resemble a comfortable old northwest lodge, giving it a welcoming appearance. The building's height and placement near the corner of the lot also made possible greater open space for use as play areas for the childcare center and parking. Sue Sherbrooke noted, "The Redmond community has enthusiastically supported this program. The adjacent school has welcomed the children; Boy Scouts have built furniture for the childcare center; clothing donations have overwhelmed the Working Wardrobe (a program to help women with clothing for job interviews); and church groups have furnished the apartments." A crucial factor in this success, according to the architects, was the reputation of the sponsor. "The stature and presence of the YWCA in this community shows at every turn in fund-raising, in obtaining approvals from neighborhood groups and public officials, and in their ability to operate the program." Since most people have been living on the streets with little or no income the YWCA works every year with corporate sponsors to underwrite operating costs. This is possible, according to Sue Sherbrooke, because, "We have been in King County for 101 years, and when we tell people we have a commitment to this development, they know we mean it."

16 units per acre + offices and childcare

YWCA of Seattle and King County