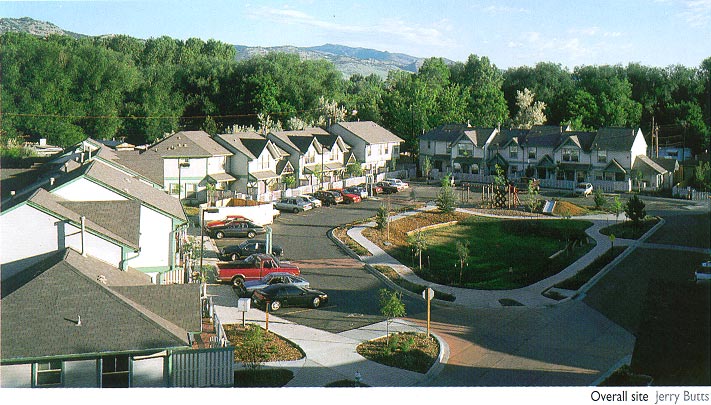 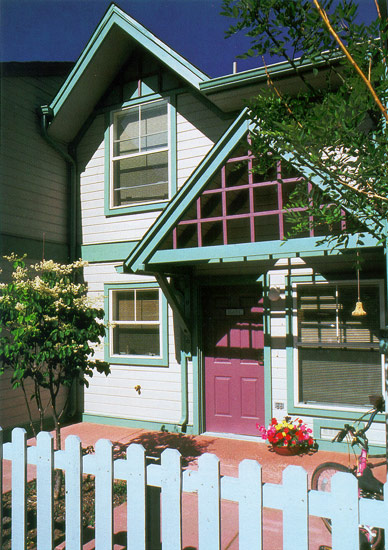 In Boulder, where single parents head 20 per cent of all households, one-third of the single-parent households live in poverty with income levels below 50 percent of the area median. The City and County Housing Authorities worked with Project Self-Sufficiency (PSS) to plan and construct Woodlands, which has 35 units of affordable housing with job training and childcare, to enable these families to achieve financial independence. PSS is a HUD-funded program in which participants attend a variety of "life skills" classes on topics such as parenting and budgeting, and receive organizational assistance as they begin a busy life as students and parents on their way to self-sufficiency. Three out of four graduates find work in stable jobs, breaking the cycle of poverty. Located in a mixed-use neighborhood in central Boulder, the site was a vacant lot that was difficult to develop. Early in 1991, the architectural firm of Barker, Rinker, Seacat and Partners was selected to design Woodlands. The City of Boulder Housing Authority (CBHA) and the architects held a number of community meetings with potential residents, neighbors, and service providers who, according to project architect Phil Lawrence, shared valuable information that helped locate the major elements on the site. "The community design team (which included current participants in the PSS program) established a set of design concepts that were crucial to the success of the plan", said Cindy Brown, project manager for the CBHA. These included: indoor and outdoor private spaces, parking near front doors, a feeling of security and community, and a neighborhood rather than an institution. The final design has six buildings, consisting of 32 attached two-story townhouses and three one-story wheelchair-accessible flats, a childcare center, and a community building. The apartments are articulated with gable roofs and front porches; wood brackets, picket fences, and lattices in the porch roofs make the facades more lively and inviting; large windows bring good daylighting to the interiors. The buildings surround a central green open space defined by a loop drive with parking spaces for the units. Each unit has a private rear patio off the kitchen, and a front porch facing the play area and parking. Lawrence noted, "The design creates community in that it is easy for residents to look out for each other. The kitchen sink is often located at the front windows so that children may be watched." Lawrence cautioned, "The center green is a safe place to play, but we recognize that the roadway also becomes a play space. We narrowed the required parking and drive widths beyond zoning standards and added speed bumps to slow people down." The development process was not always smooth. According to Cindy Brown, complex guidelines governing the use of Section 8 certificates, funding for the childcare center, and negotiations to protect tax-credit investors against risk caused major time delays and uncertainty. In the end there were over 20 sources of financing! However, toward the end of construction Brown noted, "Every day I talk to families who are excited to have a new place with high quality childcare on-site. Those brief moments make all the long hours worth it."