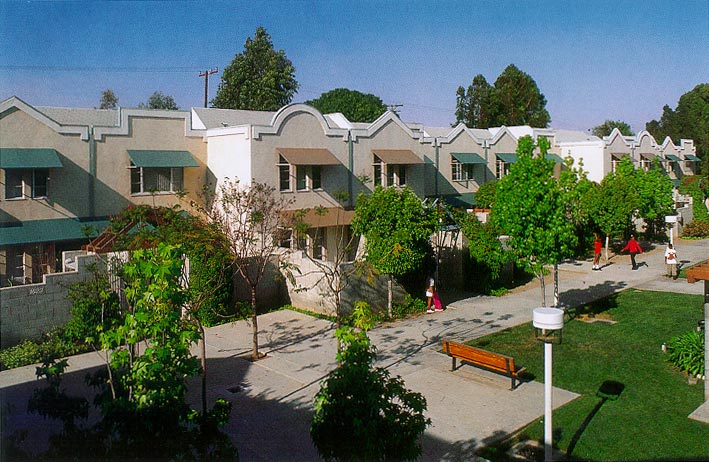 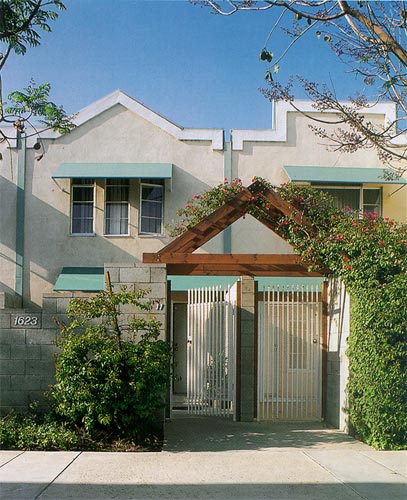 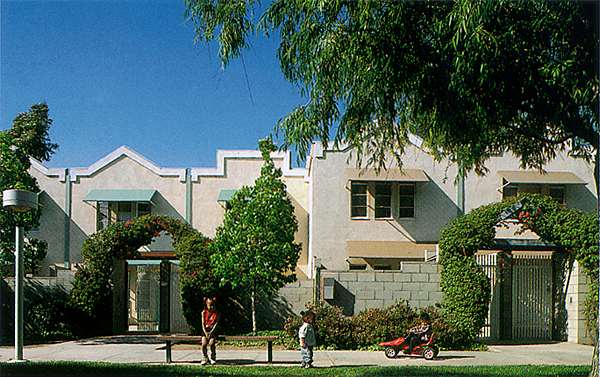 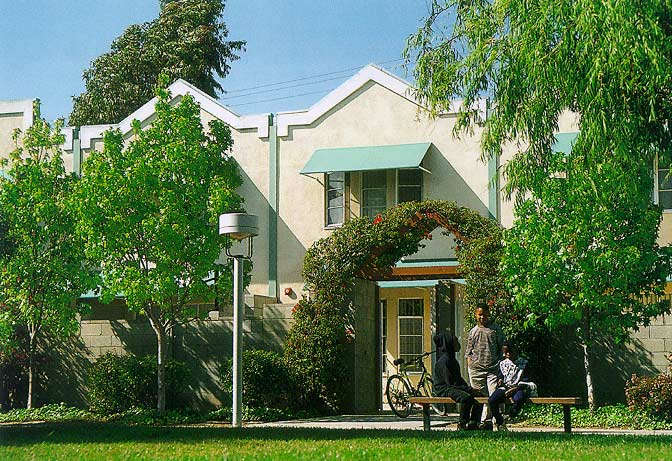 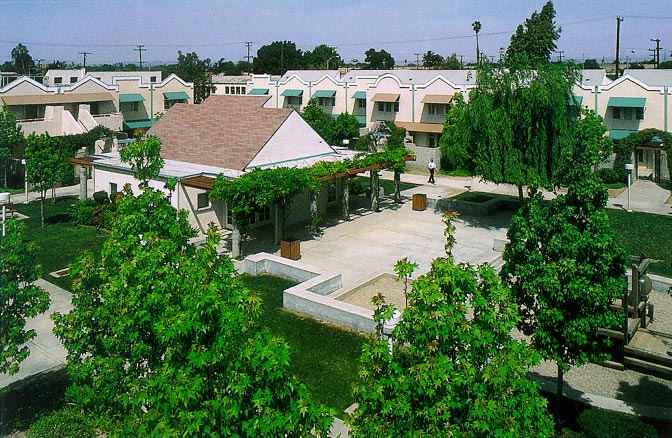 Willowbrook Green is an oasis in a tough neighborhood in south central Los Angeles. Two-story buildings surround a generous, well-landscaped courtyard containing a community building and a children's play area. Architect Ena Dubnoff designed the buildings with a scale in between that of the institutional and the residential buildings in the surrounding area. Drew University and Martin Luther King Medical Center have facilities located next door; an elementary school is across the street. A child care and development center for 60 children, not yet built, was planned as part of the complex to occupy a site adjacent to the housing. The center will serve neighborhood children as well as those living at Willowbrook. At present, Drew University uses the community building's multi-purpose room for classes in parenting and related subjects. The location of the university and the hospital nearby has created employment and training opportunities for Willowbrook and neighborhood residents. The two-story townhouses face each other across the court. As resident Venitta Cunningham, a mother with three children, observed, "The arrangement allows us to keep an eye on each other. It feels very safe." The neighborhood is a high-crime area, which made security a major design consideration. Originally, the units were to have entrances from both the street and the courtyard, but a review of security concerns led to a single secured entry to the courtyard. Once inside the courtyard there is no connection to the street or traffic. Dubnoff noted, "The final design created layers of security: gates at the parking entrance and main entrance, gates at the perimeter of the courtyard, gates at the private patio entrances, and, finally, at the front door." The front patios are raised a few steps above grade to give families added privacy. Low fences surround the patios giving residents privacy and the ability to see their children playing. In addition to the play area for younger children, there is a basketball hoop for the older kids and a barbecue for family picnics. Because of the high requirement for parking--100 spaces for 48 units including 12 guest spaces--it was decided to locate all resident parking in one area to reserve as much open space as possible for the courtyard and to separate vehicular traffic. As a result, some of the units are relatively far from the parking area, although this walk is through the secure courtyard. The windows of townhouses in the rear building look over the well lit parking lot for security, and carports protect the vehicles from the weather. Willowbrook Green took an extraordinary amount of planning and negotiation. Carla Dartis, project manager for Drew Economic Development Corporation remarked, "The project was in the planning stages for five years. In 1984, the concept was used as a prototype for developing the legislation that led to Proposition 184 -- the State program that helped fund thousands of units of well-designed affordable rental housing in California." In addition to the housing, the program included childcare, intergenerational living, and on-site tutoring, which required multiple funding sources. After eight years, Willowbrook was completed. Dartis noted, "It was a labor of love, and the residents take a lot of pride in it." Resident manager Susan Glover Hamilton observed that the housing was much better than that in the rest of the neighborhood, "A lot of people cannot afford a home so you have to design rental housing as well as possible because this is often a long term home for residents." Venitta Cunningham said her family was particularly fortunate in that among the many programs for children, the Saturday Science Academy engaged the interest of her oldest son so completely that he excelled to the point of being interviewed on World News and even met Hillary Clinton. The tutoring programs have benefited her children, and with the ability to live independently because of the low rents, Venitta is pursuing job training so that she can move off welfare. "Many of the good changes in my life would not have happened if I had not been a resident at Willowbrook."