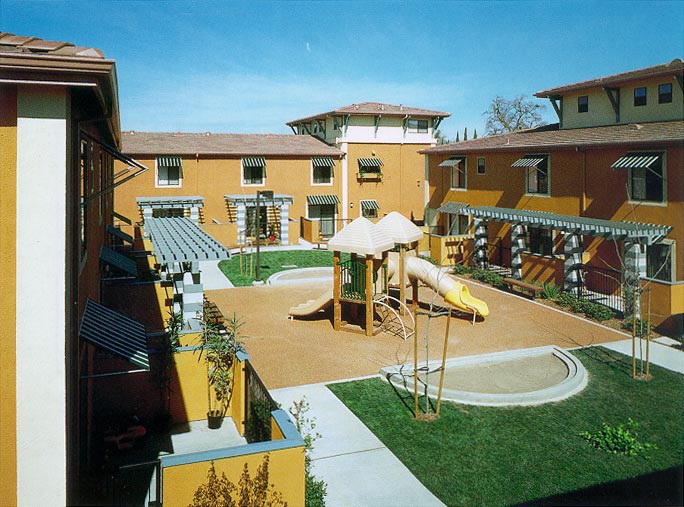 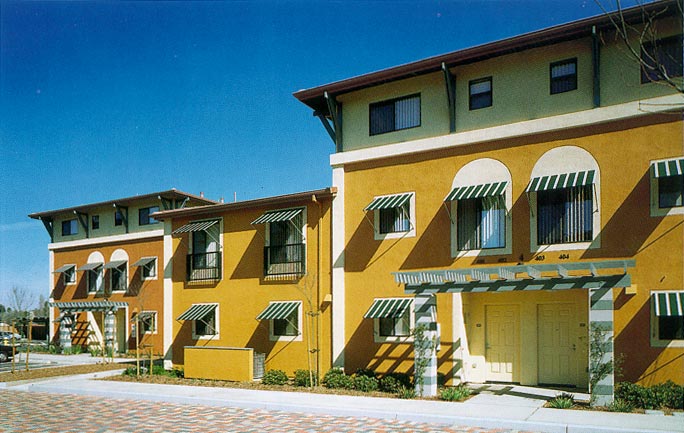 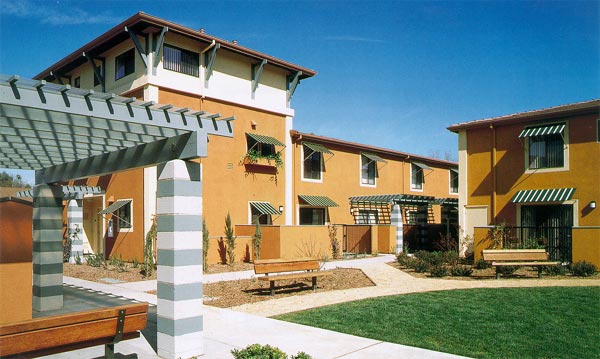 In designing Tuscany Villas/Villa Calabria, architects Davis and Joyce confronted the familiar problem of creating an identifiable place in a nondescript setting. The site has single story duplexes on one side, a very large three-story apartment complex on another side, and open fields on the other two sides. To bridge the gaps in scale and massing between the existing buildings, the architects designed two-story buildings with three-story sections either in the middle or at the corners and placed them well back from the property line of the area of single-story buildings. The three-story sections provide a visual link with the larger apartment complex, but, as a whole, the new buildings do not overpower the smaller duplexes. As the names imply, the buildings' massing refers to the Italian villa, a residential building type that was imported long ago into California because of its similar Mediterranean climate. In Davis, as in Tuscany, simple, rectangular forms and earth colors look appropriate. A large utility easement and a road divided the site into three areas. The architects took advantage of this division to create separate identities for each parcel's use. Two groups of family dwellings surround outdoor areas; the building for seniors has its own parcel. The six senior units are organized around a two-story, open-air atrium. This sheltered space provides protection from summer heat or rain for those who wish to sit outside and more security for the entries to units. The thirty family units have two and three stories to allow for some separation of activities and a degree of privacy. When possible the dining area is separate from the living area, mainly so that children could be doing homework or some other activity without being distracted by the television-viewing or talk of occupants of the living room. Most of the units have private patios at grade. On the family side, many of the patios are adjacent to one of the two large common areas. Senior residents have a community garden area. For most units there are individual entries in shared entry areas marked by a trellis or hedge. Although this area of suburban Davis is quite safe, site lighting was provided, and tall shrubbery was not used near entryways. Scattered throughout the site, the parking is placed near each building but oriented and landscaped to have minimal visual impact on the neighbors. Multi-family zoning in Davis allows for a relatively low density--about 15 units per acre--but requires two parking spaces per unit. Keith Bloom, project manager for the developer remarked, "We were able to obtain a variance from the City to reduce the amount to 1.75 spaces per unit, but even this amount of parking exceeds what residents need. The result is an under-utilization of land." Two large areas of common open space are provided for residents, an active space with play equipment and one with benches and trellises. An exercise "par course" and a barbecue and picnic area are other community amenities. Community participation in the design process was important but limited in scope. Members of the community contributed to the selection of colors for the buildings, facade treatments, and street landscaping. Design Review of the plans by the city staff did not change the initial design to any great degree. Reflecting on the lessons learned from this and other developments, the architects acknowledged that even though each community and resident group is different, it is important to listen to feedback from occupied buildings and to make changes based on that feedback. Yet after a certain point, Joyce says, "We have learned that further compromise is actually harmful to the design. It is our job to put together a design that is a unified, cohesive whole. That sometimes means telling people that what they think they want will end up being something they won't like--not an easy job!" From the perspective of Keith Bloom, both the residents and the neighborhood were happy with the housing. However, Bloom stated that, "The greatest lesson I have learned is that regardless of how many buildings one has developed in the past and regardless of how well designed and -- once built -- how well-managed these developments are, the developers of affordable housing must always be prepared to address NIMBY issues in the next project. Many neighbors and politicians choose to ignore your track record and instead focus on their fears of the stereotypical public housing project, slum, welfare housing, etc. The developer's ability to use rational arguments with these groups is nearly impossible given their emotional assessment of your development. How-ever, I would hope that over time, as more groups like mine continue to develop high quality affordable housing, communities will come to recognize this and thus will be less of a hindrance to this kind of development." Although the occupancy of Tuscany Villas and Villa Calabria is recent, residents are generally enthusiastic about living there. One tenant of the family complex expressed a commonly-held opinion, "The most successful point about the housing is that by living in a clean, safe, and non-stereotypical low-income environment you don't feel so down and out about your situation, which allows for more motivation toward success."