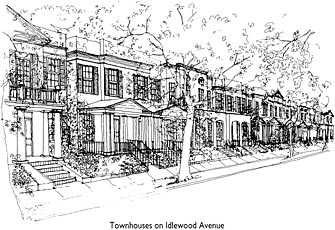 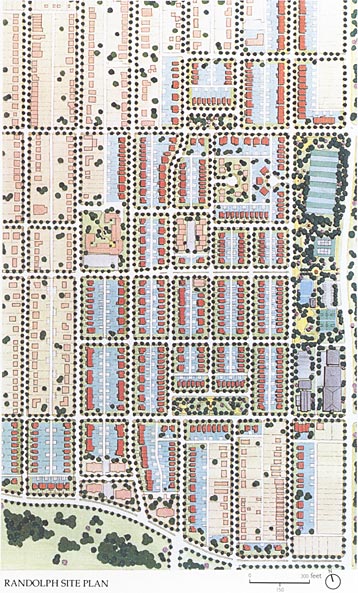 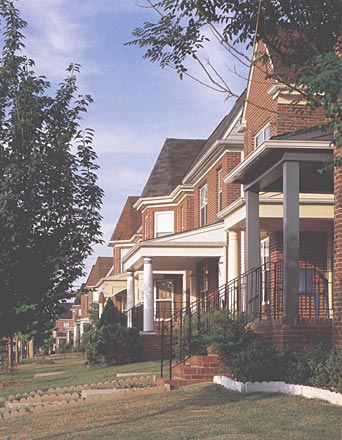 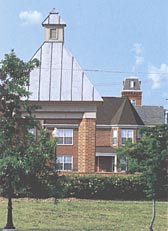 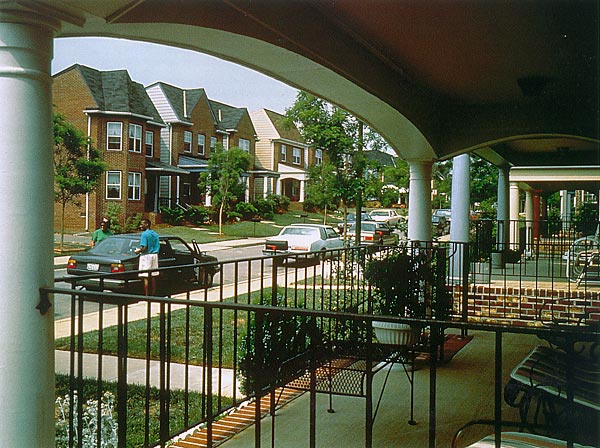 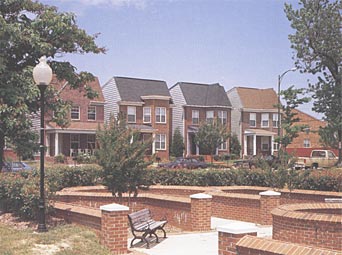 Richmond's Randolph neighborhood experienced many of the problems of urban poverty and disinvestment typical of US cities in the 1960s. In the early 1970s large areas of it were razed and designated for redevelopment. For years local citizen activists worked with the Richmond Redevelopment and Housing Authority (RRHA) to plan how to rebuild the neighborhood. From the beginning, said resident Betsy Jones, "I participated, along with a whole lot of other people, in urging the city to renew this area. 210a We were involved in all phases of the planning from street plans to parking plans to density. Now we have a healthy, vibrant community that is still developing -- I'm proud of what we accomplished. However, we lost a lot of older residents through the original renewal efforts and that was very painful." In order to accommodate community concerns that the neighborhood would not become gentrified, the first Randolph Redevelopment and Conservation Plan called for a significant amount of well designed housing for households with low incomes. However, once HUD reviewed the plan they decided that it would concentrate too many people with minimal resources in one area. The RRHA was forced to re-evaluate the plan. Although the RRHA had begun to successfully rehabilitate older houses at the edge of the neighborhood, there was debate about the type of new housing to be built. In 1981 some new public housing and Section 8 subsidized rental units were built with HUD funds, and in the mid-1980s momentum began to grow for private housing. In response to HUD, the RRHA developed a second plan with the goal of creating a mixed-income community. "Build a neighborhood, not a project," was its motto. UDA Architects was brought in and, working with the community, they began to develop a plan based on traditional design concepts. According to architect Ray Gindroz, "The many community meetings on front porches emphasized their importance and the pride that residents took in the brick facades of the houses. We designed a range of housing types that would fit seamlessly with the adjacent blocks of 1920s red brick houses with white-painted porches, mimicking the block size and the design of alleys of the adjacent neighborhood." A pattern book of houses was designed with townhouses and duplexes, each with a front and back yard and parking off a rear alley. The zoning was changed to conform to traditional patterns; this was a benefit of the designation of the district as a redevelopment area. The community process was challenging because, according to Bob Everton of the RRHA, "At first the community was not in favor of the new plan. They reminded the RRHA that they did not want to change the socio-economic characteristics of the neighborhood, and they felt that the "urban-style" of the units would be better received by persons other than the African-American community. Only after many community meetings and public hearings was the urban-style concept approved." Marketing the denser homes was hard at first, partly because it was difficult to see the neighborhood as a complete development. Gindroz remarked, "The plan called for public improvements to be done in advance of the housing. Unfortunately, the new streetscapes were put in after the model homes were built, which set the sales pace back." The neighborhood also had to compete with new suburban tracts at the edge of town, so the attached units were not as attractive to prospective buyers. Eventually, the team modified the design so that the townhouses were three feet apart and raised slightly above grade to give buyers a sense of their own home. The RRHA worked closely with local developers and contractors to ensure that the homes would sell and that the program would continue. Council member Henry Richardson, who sponsored and supported the program from the beginning, remarked, "Randolph shows how successful we can be if government agencies actually respond to citizen participation." The Randolph development was envisioned as an extension of the existing neighborhood. The city of Richmond built three public parks as part of the development. One of them has a swimming pool, a large playing field, jogging track, tennis and basketball courts, and play areas for small children. The other two parks are smaller, but are carefully tended by residents. As Gindroz pointed out, "The best way to build this type of neighborhood is to design a group of houses around a park. When competing with suburban forms that have more land per unit, it is important that the advantage of urban life -- a sense of community -- can actually be experienced." The area is exceptionally safe for one that includes a significant amount of public housing and other subsidized rental programs. However, the subsidized housing is balanced by a large number of owner-occupied, single-family houses. Along with an urban form that allows for individual identity while encouraging a sense of community, this balance has produced an environment in which residents actively maintain their security through surveillance of the street and front porch socializing. Beverly Burton bought one side of a duplex in 1983 where she raised her two children while she worked as an attorney. She commented, "This neighborhood is an attempt to get people from different backgrounds to all live together. There are people here who work in maintenance at the local hospital. It is very convenient to schools, transportation and community resources. It's like a little neighborhood right in the heart of the city!"

New construction and rehab., rental and for-sale flats and townhouses.