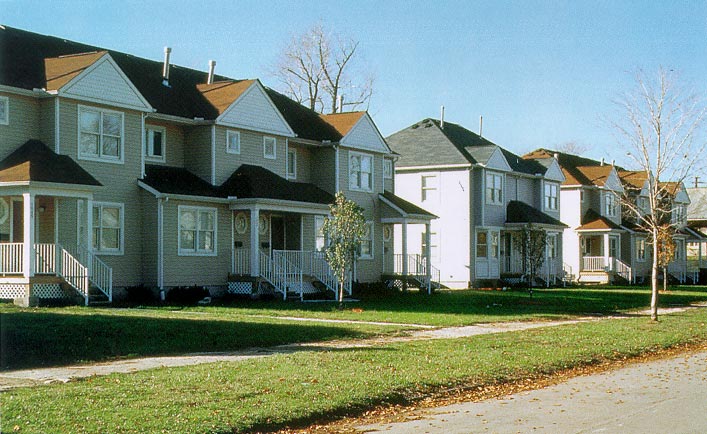 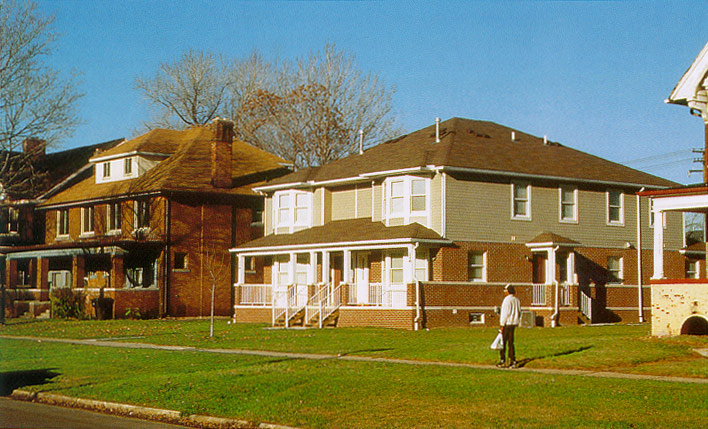 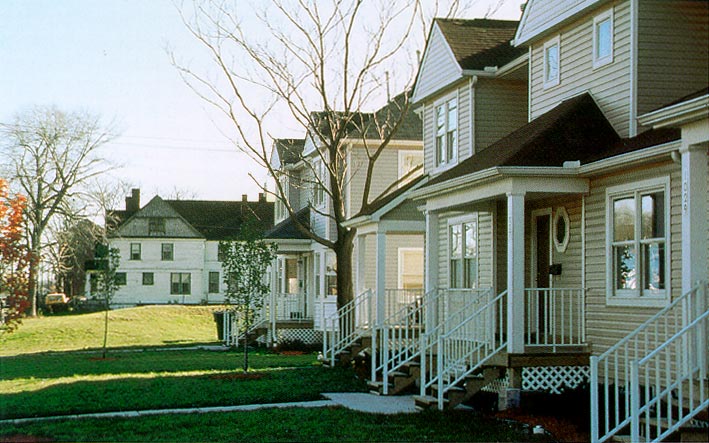 The 21 units of the Field Street infill housing are located in the Island View Village area of Detroit about three miles east of downtown. The development was sponsored by the Church of the Messiah Housing Corporation (CMHC), a non-profit organization established by the church in 1978 on Detroit's lower east side. CMHC also administers the City of Detroit's Neighborhood Opportunity Fund and HOME grants for home repair and rehabilitation, and conducts other activities related to housing needs and inner city revitalization. The homes were built on sites that had been cleared of previous structures and required excavation and removal of fill material. Architect Abraham Kadushin saw this condition as both a problem in terms of added cost and an opportunity because, he said, "It provided an impetus for designing full basements for the buildings, a significant residential amenity for residents because they provide extra living space for future needs." Kadushin described the design: "The site plan utilizes the pattern of residential buildings parallel to the street so that front entrances face the public street, and rear entrances face the semi-public alley. Parking off the alleys is on paved areas behind the residences. The building designs are interpretations and adaptations of traditional duplex and rowhouse dwellings in the neighborhood. Front porches, horizontal siding with special shapes and corner trim, window types and patterns, gabled roofs and other exterior features express this compatibility with existing buildings. Since the development is small, public space was difficult to support, but common backyard areas provide semi-public open space for the families, and a small tot lot with mature trees and vegetation has been completed." Dwelling units are arranged in four building types: duplexes, fourplexes, quadraplexes, and a modified fourplex that contains two townhouses and a stacked flat with the lower level a wheelchair-accessible unit. The homes have separate front and rear entrances reached directly from both the street and back yard. The characteristic midwestern woodframe construction of working-class Detroit neighborhoods was used, augmented by pre-fabricated wood trusses for roofs and floors, which lowered costs. The site plan allows easy monitoring of open spaces and entries. Even the alleys, previously locations of criminal activities, have been improved and are actively used by residents going to and from parking. Units are equipped with full security systems and have ample windows to allow visual connection between inside and outside areas. Abraham Kadushin summed up his firm's experience with the Field Street housing by saying: "The positive catalyzing effect of new infill housing development in a severely distressed urban neighborhood cannot be underestimated. While rehabilitation of existing deteriorated structures is extremely important, the symbolic and tangible rebirth represented by new construction is a powerful revitalizing force, attracting substantial attention and additional resources. This is especially significant when the developer is a non-profit, community-based organization undertaking responsibility for the planning, design, development, and management of the project, as was the case in Island View Village."