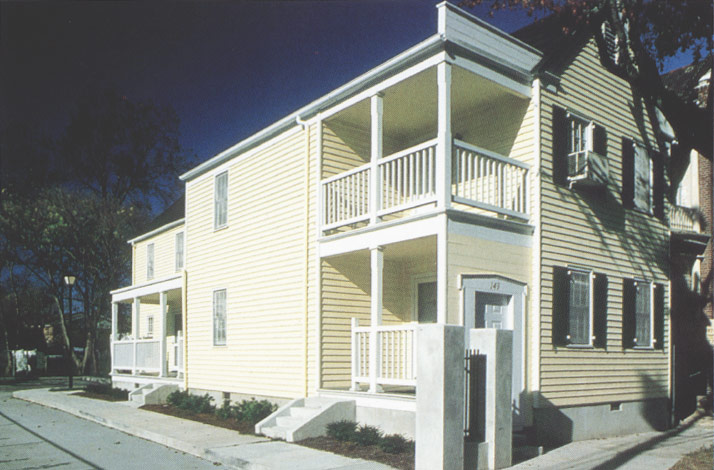 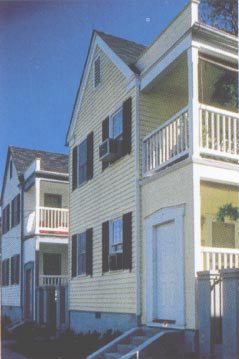 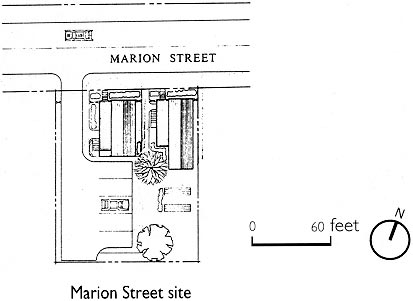 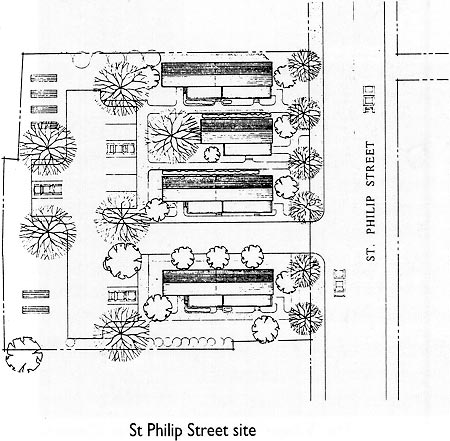 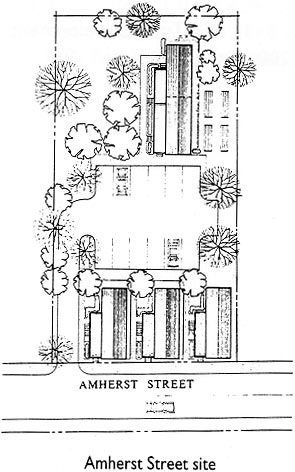 Viewing the rows of neat, well-mannered houses built in 1984 for families with low incomes in and near Charleston's premier historic district, it is difficult to imagine the opposition that the architects of Bradfield, Richards & Associates had to overcome to achieve their design especially from Charleston residents--justifiably proud of their architectural heritage and determined to protect it--opposed to housing that they assumed would be incompatible with the city's historic architecture. From the beginning the architects were determined to design buildings for Charleston. They chose as a prototype the 18th century "single house", a familiar type in the historic district. Long and narrow, this house fits nicely on the narrow Charleston lots, and, being one-room wide, provides cross-ventilation for the hot and humid climate. The duplexes have side porches, another climate-influenced feature of the side house. The architects added a false entry on the street side of the porch for privacy; the remaining street frontage is fenced for security and to strengthen the street edge. Instead of the brick veneer specified by HUD, the architects chose wood siding painted in light colors. By consulting some local builders who had restored modest houses in the area, they found ways to emulate historic details with inexpensive materials: railings were milled from standard two-by-fours, balusters were stock two-by-twos, columns were four-by-fours with chamfered edges. Despite the careful attention paid to the buildings' appearance, the initial design reviews contained pages of negative comments about nonconforming elements. However, in a series of conferences the architects and representatives of the Housing Authority won their case for the design by demonstrating that their solution, though different, was practical, efficient, and affordable. Because of a depressed construction industry, the low bid for the project was four per cent below the budget making the overall cost per square-foot only $27.06. The Housing Authority Board of Commissioners' executive director, Donald J. Cameron, and Charleston Mayor Joseph Riley were committed to locating the new housing in the historic district. Their decision was partly based on the fact that recipients of the housing were families with low and moderate incomes, some of whom were being displaced by gentrification within the district. Following the allocation of funds in 1978, more than 100 sites were reviewed before eight were selected for the 67 units of housing. The number of units per site ranged from two to fifteen with an average density of about 12 units per acre. The dimensions of the sites, typically 25 to 30 feet wide and 125 feet deep, imposed their own restrictions on the design. Location in the historic district also carried with it the imposition of standards set by city, state and federal agencies. Architect Richard H. Bradfield, FAIA reported, "This public housing did not reduce property values on adjacent sites, nor did it deter private investors. Most important, it did not inhibit the efforts of the communities to continue the rehabilitation and restoration of (other) historic sections." On Amherst Street where nearly 50 per cent of the lots had been vacant, development returned to the neighborhood for the first time in more than 20 years. The residents of the new housing are proud of their homes and interested in planting flowers and additional shrubbery to supplement the landscaping in the small yards. One resident registered her only complaint: "It should be mine," she said, "I take care of it." In giving this housing an Honor Award in 1986, members of the national A.I.A. awards jury commented that the architects' "skillful adaptation" allowed "the dignity of the architecture to nurture the dignity of the people who reside within it making this an example of what low-cost housing should be, but rarely is--shelter not just for the body, but for the human spirit."

Housing Authority of City of Charleston