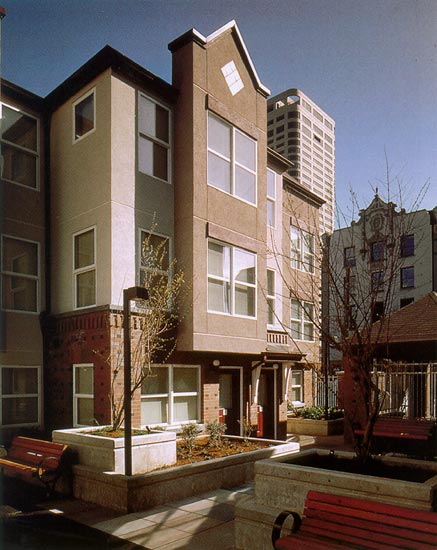 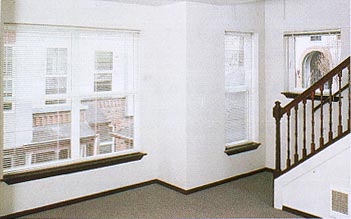 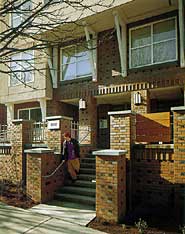 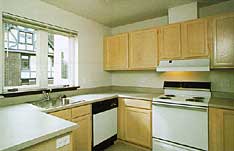 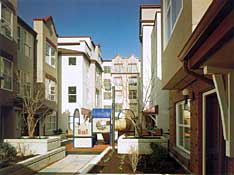 Among the thorny challenges that architects face in designing housing for families with low incomes in historic neighborhoods is that of compatibility with older historically significant buildings. In the case of Cascade Court Apartments, GGLO architects met the challenge of designing a 100-unit apartment building next to former single-family mansion with great success. If the architects had not been sensitive to the context, the much larger building might well have been an intrusion rather than a contribution to the neighborhood. The adjacent building, the landmark Stimson-Green mansion built in 1900 was occupied by Priscilla Collins, who had grown up in the house. Concerned about the possibility of high rise condominiums being developed on the adjacent lot, she bought the parcel. Her desire that families be able to live in the neighborhood influenced her decision to sell the property at 25% of the sales price to a non-profit development corporation, the Seattle Housing Resources Group (SHRG), which agreed to develop the site as housing for families with children. When interviewed about the housing, Mrs. Collins noted that the existence of an attractive building housing a diverse community had reduced crime in the neighborhood, particularly the drug traffic and prostitution that the formerly empty lot invited. "No one that I know of has complained about the residents," Ms. Collins affirmed, "Instead planners and politicians show the development as a model." The building was planned to enable residents to observe people coming and going through the gated courtyard entrance. The manager's office many windows, and is a central location of security. The entrance, lobby, mail area and laundry are visually connected to the office. Residents can view the lobby and screen their visitors from the units. Each of the two underground parking levels has a security camera as do the lobby and courtyard. The massing of Cascade Court, which has three-story townhouses on the south side at the street front rising to five-story flats at the north side of the site, is also sympathetic to the view from the street of the Stimson-Green house. A central courtyard that divides the street frontage of the building into two facades also gives the building a scale more compatible with the mansion. The courtyard includes a play area for the children near the townhouses, which have the larger family units. Resident Manager Rosie Martinez mentions "We have a program where the kids help pick up garbage in the courtyard in return for a pizza party at the end of the summer." The three-bedroom units are well lit by large square windows and come with dishwashers and laundries. Priscilla Collins' request for a variety of units to serve a diverse community of singles, couples, and families resulted in 39 studios, 35 one-bedroom, 14 two-bedroom, and 12 three-bedroom units arranged in various combinations of flats and townhouses. Although the architects were not trying to emulate any regional architectural tradition, the Tudor revival style of the Stimson-Green house influenced their choice of materials, the patterned brick base with stuccoed walls above, and such features as the gabled parapets on dormers and bays capped with contrasting moldings and the pyramidal r-oofed towers. Taking advantage of an option allowed in the Seattle Land Use Code, the architects designed the building to mid-rise standards, which resulted in a lower structure with a larger footprint. In Seattle five-story wood-frame construction is allowed in the Uniform Building Code's type V-1 hour construction. This factor added to the regional economic advantage of wood and a competitive work force in wood-frame construction was important in determining the building's scale. The creative package of funding for Cascade Court from public and private sources demonstrates that alternative ways of financing housing for low income people can have exemplary results. In this case the package had a property owner committed to doing something positive for the neighborhood, a prominent Seattle retailer, Nordstrom, which contributed equity in exchange for tax credits, bank loans, a low interest loan from the State of Washington, and an energy conservation credit. Although no locally mandated design review ex-isted, the architects worked through the design with Priscilla Collins and the staff of SHRG. Nancy F. Smith, Executive Director of SHRG, commented that the development was the result of an experienced team working together and the generous contribution of a valuable property. First Hill, as its name suggests, was the first prime residential area developed in burgeoning Seattle around the turn-of-the-century. The hill's convenience to downtown employment and services was much prized by its affluent residents. The present residents, who earn no more than 40% to 60% of the area's median income, are also very pleased to have a home on First Hill. Cascade Court serves as an outstanding example of how to design affordable housing for families with low incomes in established neighborhoods.