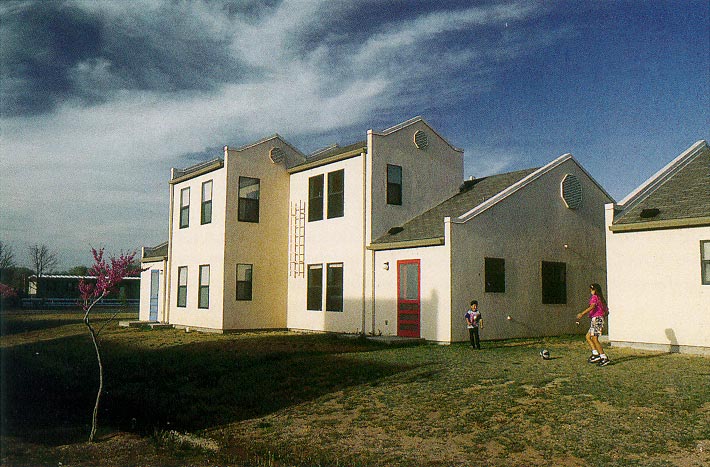 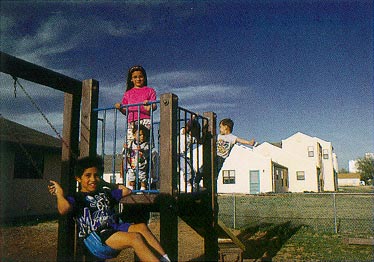 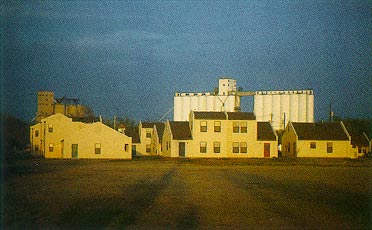 Subsidized housing had such a bad name in this small Texas panhandle town that there was heavy opposition to the development of Amistad in the town of Hereford. Fortunately the zoning for the apartments already existed so city approval was not necessary. Amistad is a community group that formed in 1985 when Motivation Education and Training, Inc. (MET) , in Austin, Texas, began inquiries about interest in farm labor housing. The goal was to provide affordable housing for migrant farmworker families with incomes ranging from $3,000 to $16,000 a year, and to create community and private spaces sensitive to their needs. After MET hired Tom Hatch as project architect, he began discussions about the design with Amistad representatives. Following numerous delays caused by the local Farmer's Home Administration office, the architect learned that the agency was reluctant to approve the development because, as one of the employees admitted, "the housing looked too nice!" Now that the housing has been built the surrounding community is quite pleased with it because it is very different from their past experience in other places. They think it is the "prettiest housing in town" and find it safe and clean. Units are organized in groups of ten around cul-de-sacs with parking off the main entrance street. This plan permitted generous open spaces between clusters. Buildings have different heights and a variety of forms to avoid the monotonous appearance of typical apartment blocks. Although the density is greater than that of the surrounding area, the buildings look smaller because of their varied form and staggered heights. Speaking about the design, architects Tom Hatch and Joel Martinez acknowledged that, "Good design for this type of housing takes extra effort--we had to be very creative in the use of similar floor plans throughout the development--but it is achievable and worth it." Since the design has units clustered around three cul-de-sac streets, the residents can observe outside activities. The tenants have formed a neighborhood watch and share the responsibilities of looking out for one another. The housing has fostered community spirit and caused the city to pave adjacent streets. Local newspapers even feature success stories about the people at Amistad. The community supported the second phase of 20 units. The community garden, now in its third year, is a great success with many volunteers caring for it throughout the growing season. The managers and volunteers notify the tenants when the harvested vegetables are available and leave them in the laundry room for pickup. Residents have also imposed a curfew on themselves that requires children and teenagers to be in their units by 10 pm and 11:30 on weekends. Mike and Angie Alonzo, a husband and wife team, manage Amistad and are always on call. They said that, "Amistad is beautiful, well designed, homey, and well managed. Now residents and town people alike take great pride in Amistad." Indeed, after word spread about the housing, people of varied income levels applied to live there and were surprised to find that it was reserved for farmworkers."

One- and two-story woodframe, with stucco exterior, comp. shingle roofs.